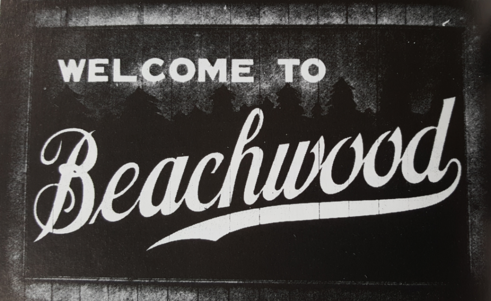 Up Next- The Push for Fire Protection

​​​​The Birth of Beachwood

The Borough of Beachwood began in 1914 with 1763 acres of land in Berkeley Township being sectioned for development as a summer colony.  Beachwood was created by Bertram C. Mayo who envisioned a healthy retreat and that Beachwood in the Pines would become an all year resort.  The streets and lots were laid out by Addison D. Nickerson with the lots each being 20’ X 100’.  In November of 1914 the New York Tribune newspaper, cooperating with Mr. Mayo, issued an “Extra” with the headline “Subscribe for the New York Tribune and secure a lot at Beautiful Beachwood."  The price of the lots were $19.60 apiece and came with a six month subscription to the paper.  At that time, work had begun on a club house, pier, lodge dining hall and railroad station.  On Easter Sunday in 1915, the first year round residents of Beachwood (credited as Mr. and Mrs. Frank J. Perry and their son Robert) arrived and unfolded their large, circus like tent and took up residence.  During that summer a number of cottages were built and Frank McCraigh (future Fire Department member) opened the first store in town on Beachwood Boulevard.

On July 20, 1916, Mr. Mayo wrote to the residents of Beachwood suggesting that they take active management of the “upbuilding” and development of Beachwood be handled by the property owners.  Committees were suggested for the handling of railroad-crossing and taxes; bathing and sports; lighting and telephones; mail and express; police and fire-protection; street improvements; social life and entertainment; health and sanitation.  This led to the creation of the Beachwood Property Owners Association on July 29, 1916 with William Mill Butler elected as the group’s president.   Frank J. Turner was appointed as Beachwood’s first Fire Warden. (Mr. Turner also served as Beachwood’s Police Officer watching over houses in the absence of their owners)  Maximillian R. DeMiege  served as Deputy Fire Warden.  With the establishment of a Property Owners Association the discussion of raising funds for fire protection began.  Mrs. Wanda E. Lohr of Capstan Avenue (her Japanese pagoda style house still remains there today) is credited as the “original agitator” of proper fire protection in Beachwood having raised the topic years prior. On March 5, 1917 it was announced that the “Beachwood Borough Bill” introduced in the New Jersey Legislature on February 27th,  was passed by the Senate without a dissenting vote.   The Bill is passed by the House and signed by Governor Walter E. Edge.  The Borough of Beachwood is incorporated on March 22, 1917 and separates from Berkeley Township.

​The Borough of Beachwood is Born!

History of the Beachwood Fire Department