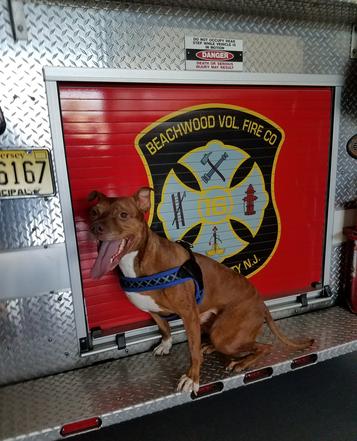 Just before 2 AM the Beachwood and Pine Beach Fire Departments responded to the report of a structure fire on Harpoon Street. Upon arrival, command reported a room and contents fire on the second floor of the home. The fire was extinguished in approximately 20 minutes and there were no reported injuries to the residents of the home. The resident's dog alerted them to the fire, waking them prior to activation of the home's smoke detectors. The fire was investigated by the Ocean County Fire Marshal's Office.

Later that evening, Jeremy Brown, one of the residents from this  house fire stopped by the Beachwood Fire House to thank Station 16 members for their work at the fire.  Accompanying Mr. Brown was his pit bull Zeus who has been credited for alerting the family to the fire before the smoke detectors had activated. Zeus toured the station and met our members as Mr. Brown thanked us and the Pine Beach Fire Department for holding the fire to just one room, adding that although the house is uninhabitable "it could have been a lot worse". Thanks to Zeus, everyone got out of the house in the early stages of the fire and no one was injured. Nice Job to Zeus our Honorary Firefighter!