At the July 28, 1922 meeting of the Fire Department, it was reported that the Property Owner's Association would be purchasing a Ford chassis to mount the fire apparatus they previously purchased which was hand drawn.   The Property Owners had discussed at their first meeting of the 1922 season that rather than purchase a second hand drawn fire apparatus for use in Beachwood Heights (the area south of what is today Route 9), the Ford chassis would be purchased by the Borough so the previously purchased apparatus could be mounted to it and made available to all parts of the town.  The fire department responded by promising to have 50 or more members ready at all times to respond to fires.  The fire department began to look for a site for a new firehouse.  It was also determined that all members who joined before the adoption of the company by-laws would be Charter Members.

The fire department then established two classifications of membership at the August 4, 1922 meeting,  The classes are Active and Associate members.  Active members to be bona-fide or full year residents of Beachwood, with a limit of 30 in this class.  Associate members are part time members "desirous of contributing to the welfare."

On August 15, 1922, the Fire Department purchased six lots from the Estate of B.C. Mayo for the purpose of building a new fire station.  Lots # 21, 22, 23, 24, 25, and 26 of Block D26, Plat DB, Map #14 of the Borough are bought for $116.25.  The lots are located on Atlantic City Boulevard near Beachwood Boulevard. The Borough would later decide that they would  build the fire house along with a new Borough Hall on the second floor.  The Borough agreed to buy the lots from the Fire Department and reimburse us for all expenses.  The purchase would have to be made through the issuing of temporary improvement bonds.

At the annual masquerade party on September 2, 1922 ladies masked and attired as firemen appeared as "Volunteer Fire Department #2" which aroused amusement and curiosity, as did the presence of the K.K.K..

Labor Day 1922- The Fire Department held a parade led by Mayor Collins (Acting Chief) and Deputy Chief James McDonald.  The firemen were dressed in their new dark blue uniforms and marched in front of the newly equipped Ford fire truck.  This was followed by an auto with Wanda Lohr, the original agitator for fire protection, and Mrs. Albertine Keller and Mrs. J.H. Richards who had assisted in getting up the first entertainment for the benefit of the fire protection fund, out of which goes the fair.  The wives of the firemen followed in the parade, dressed in white and wearing white cockade hats.  The parade went around the "plaza" to the clubhouse where O. Frederick Rost, President of the Property Owners Association, formally presented the Ford chassis.  Mayor Collins accepted with appropriate remarks.  Mr. Rost also presented a siren to the fire company for the purpose of sounding alarms. (1924 Who's Who- William Mil Butler) 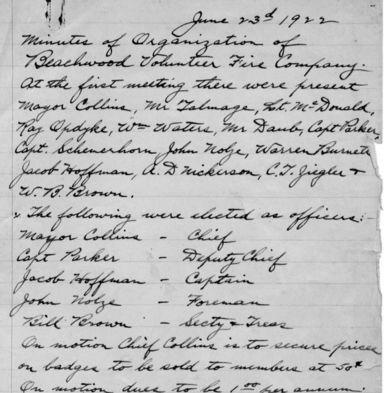 At the August 11, 1922 meeting, the Fire Department reported that despite bad weather, the August 5th Dance fund raiser was a huge success, raising $20.00 for the company.  Captain Hoffman was authorized to negotiate with the Estate of B.C. Mayo for the purchase of six lots for the site of the new firehouse.  At this time the company held its meetings in the Borough Hall and the fire apparatus was stored in our first firehouse, being the borough garage at Lookout  and Spithead Streets.  (approximately where the tennis courts at Mayo Park are located today)  Foreman Nolze was charged with mounting the fire apparatus on the Ford chassis.  The truck was built and with the exception of lettering, ready for use by August 25th.  Nolze and Clarence Coryell were named as the apparatus drivers. 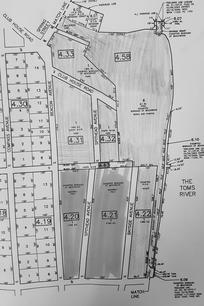 ​​​​​The Fire Department is Established