In March of 1918 and again in early 1919, two significant brush fires threatened the southwest and southeast portions of Beachwood.  Property owners were urged to clean up the underbrush.  At the August 9, 1919 annual meeting of the Beachwood Property Owners Association, the movement for the purchase of a chemical fire engine, started by Mrs. Lohr was warmly endorsed.  Wanda Lohr was named chairman of the committee on fire protection.  On August 15, 1919 the Beachwood “Races” were held in aid of the purchase of the fire engine and drew a large attendance at Borough Hall.  Cash donations were received and approximately $300 was raised for the engine.

​ In 1920 the Beachwood Property Owners Association adopted a resolution that the association should conduct a carnival and fair during 1921 for the purpose of raising additional money necessary for the purchase of fire apparatus.

On June 20, 1920, “A forest fire which threatened Beachwood was said to have been set at Pinewald by a Jersey Central train.  The fire in Beachwood burned around several houses in Beachwood Heights (the portion of town south of the railroad tracks), but thanks to a small army of firefighters under the direction of Fire Warden Joseph E. Abbot and the Toms River Fire Company, the conflagration was extinguished without the loss of life or property. This is believed to be one of the first fire calls answered by the residents of Beachwood not yet organized as a borough fire company.” 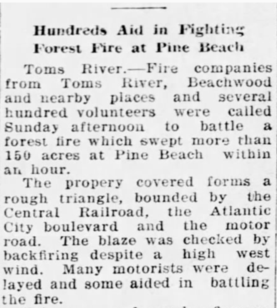 As Property Owners plan to establish a Beachwood Fire Department, the newly formed Toms River Fire Company # 2 sends subscriptions for their fire engine fund to residents of Beachwood.   A meeting to form our own Fire Company was set by property owners to be held in the Borough Hall at the end of June 1922.

Mrs. William Mil Butler  set a personal record at the Bake Sale during the Beachwood Fair to raise funds for fire protection, making $152.86. 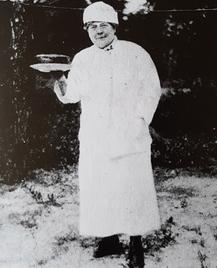 Up Next- A Fire Department is Formed 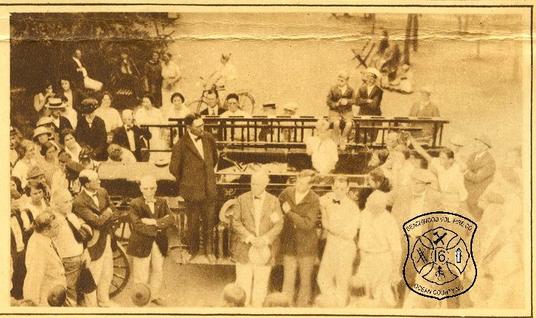 The year 1921 found the Beachwood Women’s Club ready to assist buying a fire apparatus for the Borough.  Every week the members gathered at a porch party where plans were perfected for the proposed fair, held under the auspices of the Property Owners Association.

On August 11, 1921 the Beachwood Fair was held in aid of the fire apparatus fund.  It was described as “the leading event of the 1921 season” in William M. Butler’s 1924 Beachwood Directory and Who’s Who.  The original Borough Hall, built as the “Dining Hall” located approximately where the Mayo Park playground is today, was decorated with pine and oak as well as red, white and blue bunting and flags.  Fifteen booths where residents had various duties and sold items were arranged inside.  On display at the fair was a four wheeled, hand pulled chemical fire engine cart.  The fire engine was purchased by O. Frederic Rost, President of the Property Owners Association, on “his personal responsibility”.  It is believed, Mr. Rost personally fronted the money to pay for the fire truck.  The fair raised a total of $2307.17 through sales and donations, netting $1975.87 after expenses.  The cost paid for the fire engine was $1645.99.

September 5, 1921- Labor Day,  “One of the striking incidents of this day was the formal presentation of the fire ring system and the fire apparatus to the Borough by the Property Owners’ Association.  O. Frederick Rost, president of the Association, made the presentation speech, in front of the club house, and Mayor J.H. Senior responded for the Borough.  The suggestion of a volunteer Fire Department was made about this time.”